Topic We’re Pondering: Does Hollywood have an obligation to provide content warnings for films with themes of mental health / illness?

In October after the release of the popular ‘A Star Is Born’, some of our staff discussed their varied reactions to the highly buzzed-about film. While the general consensus was that it was an extremely powerful film with beautiful music (*ahem* Lady Gaga is a literal legend), we were also left with the feeling that it was… a lot.

If all you had seen was the trailer, you might have been expecting a lighthearted rom com. For me personally, as someone who had only seen the trailer and read rave reviews in various Facebook posts from friends, I was not at all aware of the emotional roller coaster I was about to be subjected to.

It only came to my attention after seeing the film that The Mighty had published an article titled “People Are Warning Each Other About a Mental Health Trigger in ‘A Star Is Born‘” to address similar feedback to mine. Since all of the posts I had seen on my personal Facebook feed raved about the film without addressing any of the content, I went so far as to share my two cents on my own page.

My feeling around warning others was similarly shared by other viewers in The Mighty article. Whose responsibility is it to warn our friends, family, or other potential viewers we won’t reach? Because the film deals with a lot of heavy content which isn’t overtly advertised, it’s left me wondering: at what point should the producers and distributors of  mainstream movies and media be required to offer content warnings?

I know, I know. I can already hear the counter-arguments. Content warnings would spoil the movie. There will be 45 content warnings for every single film. Millenials are snowflakes… blah blah blah.

But I would argue that suicide is different. For those of us who, tragically, live with the reality of suicide in our day-to-day lives, it’s never a casual thing. There’s never a “little” suicide reference. It’s never not jarring and it can even be dangerously triggering to see suicidal ideation and completed suicide on screen.

This is why I firmly believe that there should always be content warnings for any explicit or potentially triggering suicidal content. It won’t ruin the movie. And it wouldn’t be that hard to have a super brief list ahead of the film. The MPAA already has this system in place, it would just be a matter of adding suicide to the list of topics that people deserve to know about prior to experiencing a film. For example, A Star is Born could have included: “sexual violence, suicidal ideation” or “depiction of suicide / glamorization of suicide”. At the very least, there should have been a message at the end of the film prior to the credits which makes a connection to resources and support. Without that, it feels like a missed opportunity to truly support people and create concrete action from an otherwise emotionally overwhelming film.

We asked our network what they thought. Here’s what some had to say:

One of the members of our Ambassador Leadership Council recommended implementing opt-in content warnings during film previews for people who are concerned with mental health topics. While it may be easy to believe that we have very little pull in changing the culture around this topic, it’s important to remember that we have every right to question the messages we receive in the media – especially when it comes to mental health. As our E.D. Cary McQueen says, ‘the media tells us stories about mental health. It’s our job to decode those messages and decide for ourselves what to believe’. 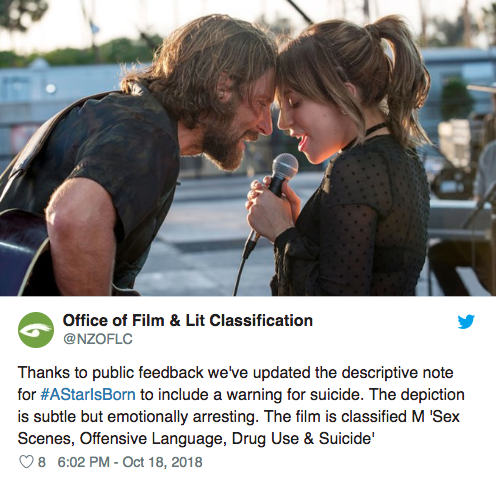 Perhaps the MPAA can take a page from the NZOFLC’s book. In New Zealand, the national rating board changed the rating of A Star is Born in their theatres after teenagers reported being triggered by scenes around suicide. The film is now classified as “M” (mature) for “sex scenes, offensive language, drug use & suicide”. Says the Office of Film & Lit Classification in the country, “we’ve had a number of people contact us because they WEREN’T warned, and were unexpectedly traumatized watching the film after recent bereavements to suicide.”

What are your thoughts? Does Hollywood and mainstream media have an obligation to provide content warnings when it comes to films with themes of mental health / illness?