Meet Nisha Gupta, director of the LGBTQ-advocacy short film “Illuminate,” a 20-minute cinematic poem about being in the closet as a sexual minority. Not only is Nisha is the founder of the Phenomenological Film Collective, a filmmaking group that produces short films about lived experiences of oppression to promote compassion, solidarity, and hope, she also holds a clinical psychology PhD at Duquesne University who integrates liberation psychology, phenomenological research, and the media arts to create therapeutic interventions for personal and sociocultural healing.

Nisha says of directing the short film Illuminate: “while working on this film about being in the closet as a sexual minority, I never felt so much joy move through me as by the process of transforming political trauma into hopeful art. It’s been one of the most meaningful things I have ever done in my life. Directing this film as a queer woman of color, and working with such a diverse cast of queer actors and actors of color created this beautiful blurring of boundaries between fiction and documentary. It allowed us to tell stories of our own lives, and pursue catharsis and hope, as we together wade through the collective sociopolitical trauma of being marginalized minority citizens in the era of Trump’s America. Yet this film is not just for us. It’s also meant to honor the millions of LGBTQ people from past eras, all around the world, who never got to tell their stories of sociopolitical trauma–their stories of the closet.”

You can view the full film below:

illuminate: a cinematic poem about being in the closet from Phenomenological Film Collective on Vimeo.

Nisha: While making this short film about the trauma of the LGBTQ closet, I became fascinated by the role of beauty in trauma-healing as both a filmmaker and psychologist. Psychologist Pierro Ferruci said, “Beauty is the affirmation of life.” In times of despair, we hunger for glimmers of beauty to hold onto hope and affirm life. So while making the film “illuminate,” creating aesthetically beautiful cinematography became the guiding force of the project. I wanted the film’s cinematography to communicate to viewers—particularly closeted LGBTQ viewers—that amidst the closet’s despair, tiny glimmers of beauty, light, and hope still exist and are worth searching for. I wanted this film to demonstrate that these glimmers of beauty, within the closet’s walls, can serve as windows to solace and liberation—and perhaps to eventually coming out. As a psychologist, making this film made me realize that shining a light on beauty is essential to helping traumatized people make their way out of despair—a significant insight for the LGBTQ community due to its high suicide rates. Maybe that’s why art is so effective for trauma-healing: it returns us to beauty and hope amidst the depths of our suffering.

AWI: What were the first few steps you took to planning / mapping out your approach to the topic? What steps did you take (if applicable) to learning more about mental health and trauma broadly, and especially the intersection of trauma and LGBTQ mental health.

Nisha: My process as a filmmaker is unique in that I am also a LGBTQ-affirmative and trauma-informed psychotherapist. My psychotherapy training has taught me that socio-political oppression is inherently traumatic, and that this trauma impacts marginalized people at the level of our bodies. So to make this film, I conducted in-depth interviews with research participants about their lived experiences of being closeted as a sexual minority. During interviews, I guided them through a body-focused psychotherapy technique called “Focusing,” through which I helped participants attend to their bodily sensations regarding their experiences of the closet. I then helped them language their bodily sensations through symbolic imagery and metaphor. For instance, one participant felt hot anger spreading across his belly in response to the closet, which he expressed through the image of a spinning wheel of fire. Another participant felt his face becoming flat and featureless in response to the closet, which he expressed through the image of a white, porcelain mask.  Participants also expressed hopeful imagery associated with coming out of the closet, such as their body feeling peaceful like calm still waters, or loved like a steaming cup of tea. All participants’ symbolic imagery of the closet was then directly translated into cinematography through a traditional film production process with a talented team of cinematographers and actors, and it became the main creative content that constitutes the short film ‘Illuminate.”

AWI: How can you ensure you are being genuine and using storytelling effectively in a short film?

Nisha: Ensuring authenticity was important to my filmmaking process, particularly in creating an LGBTQ-advocacy short film.  I wanted the film to be as authentic as possible to the lived experiences of diverse LGBTQ persons. As mentioned previously, I tried to ensure authenticity by rooting the film’s content directly in research interviews with members of the LGBTQ community about their lived experiences of marginalization. In this sense, my research participants became creative collaborators for the short film, because their own personal stories of the closet constituted the artistic fodder for “illuminate.” 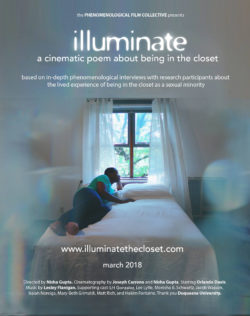 AWI: We LOVE your website – can you walk us through some of the sections there?

Nisha: Thanks!  On www.illuminatethecloset.com, you can not only view the 20-minute short film “illuminate,” but also read information that intertwines psychology with human rights law. The website explains how the film “illuminate” poses a political argument: that the LGBTQ closet entails a traumatic loss of existential rights—the right to truth, freedom, love, hope and power.  The website extensively outlines the mental health impact of these human rights losses upon the LGBTQ community. It also suggests ways that citizens of society can band together in solidarity to re-gain access to these existential rights. Finally, it provides a list of LGBTQ mental health and political advocacy resources.

AWI: What are some (low cost, accessible) resources that have been helpful to you as an emerging filmmaker?

Nisha: Alongside completing my Ph.D. in clinical psychology at Duquesne University in Pittsburgh, I took filmmaking classes at Pittsburgh Filmmakers, which I found to be an invaluable resource to getting my feet wet as a novice filmmaker. Also, Youtube is a godsend.

AWI: Do you hope to continue to incorporate the arts as a form of expression, healing and research in your career and studies moving forward? If so, why do you think this intersection of world’s is so critical?

Nisha: Absolutely. Most of my work as a psychologist focuses on the psychological impact of socio-political oppression upon members of marginalized communities. I believe it is essential to share these psychological experiences with the public, in order to foster compassion and solidarity and spur social change.  Art is an amazing vehicle to evoke compassion—particularly films. I see my career as a psychologist to be one in which I will continue producing social advocacy films that express the emotional pain of marginalized experiences, in order to do my part as a citizen in shaping a more loving society.

Be sure to check out the film’s website and follow along Nisha’s progress – she is sure to make waves in the intersection of mental health and film 🙂 Starting in Fall 2018, she will join the faculty of University of West Georgia’s Psychology Department as a tenure-track assistant professor of psychology.