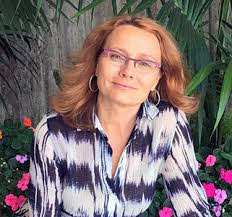 Kirsten (she/her) is a Juilliard-trained actor with a PhD in depth psychology working in private practice in Santa Monica, CA. Prior to becoming a psychotherapist, she balanced careers in stage, television, and film while serving marginalized populations including Vietnamese refugee children in New York; homeless, pregnant women in Venice (CA); juvenile criminals in rehabilitation and artists with mental and physical disabilities in Minneapolis; and individuals dealing with life-threatening illnesses in Santa Barbara. Kirsten was also involved in the early AIDS education movement and was the spokeswoman for the first safer sex commercials in the United States.

Today, Kirsten is devoted to the multi-modal languaging of human experience. She integrates expressive, somatic, and ecological practices to unearth profound, often orphaned, stories through a process she calls, Embodied Theater Ecology. She has found that such storytelling inevitably embodies a universally relevant symbolic language that promotes a recognition and understanding of our common human condition, irrespective of culture or time.