Many of us have mixed feelings about James Franco. He was so adorably spacey in Freaks and Geeks, so mainstream in Spider-man, so solid in Milk, and so unbearably pretentious pretty much everywhere else.

When it gets to be too much, just do what I do and watch him squirm in 127 Hours.

Franco recently seems to be indulging himself in a series of personal projects—a bizarre and apparently ironic gig on General Hospital and the film Erased James Franco in which he acts out all parts of scenes from his past films—and his latest effort, Maladies, seems to fall in line with his recent pattern of offbeat, somewhat indulgent choices. 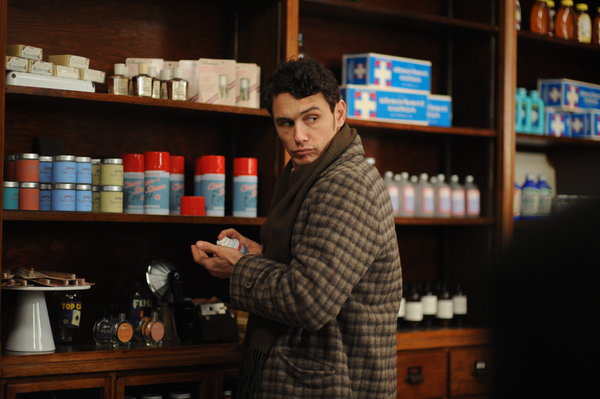 A collaboration with one-name writer/director Carter (who also brought Erased James Franco to life), Maladies stars Franco as (who else) James, a soap opera actor turned writer trying to embark upon a career as a novelist. Playing what appears to be a 1960s-era fictionalized version of himself, Franco-as-James is a “tortured, infantile artist, obsessed with creation and death” who suffers from an unidentified mental illness, and is surrounded by a handful of similarly eccentric characters (skillfully portrayed by Fallon Goodson, Catherine Keener, and David Strathairn) and a narrator that only he can hear. Through its chaotic structure and unconventional characters, Carter uses Maladies to question the relationship between creativity and mental illness and what it means to define someone as mentally ill – even going so far as to suggest that mental illness is “really all in our heads” (pun intended?).

Though screened at some festivals last year, Maladies was released online March 25th, and is now receiving widespread critical reaction. Let’s take a look at what the reviews have to say:

“Maladies is a film dealing with deep issues at a humble pace that doesn’t try to answer all of the questions it raises, a refreshing break from the constant stream of would-be genre-defining epics lately. It consistently brings a smile with witty banter and surprising messes, but manages to make some very serious statements about the way art can, or cannot, endure. Pleasant and deeply thought-provoking with a comfortable 97-minute length, Maladies offers stellar performances and a glimpse of smart movie-making craft with potential.” – Eric Wimer, Columbia Spectator

“It’s not at all clear what Carter and Franco are trying to say about the nature of creativity…and its relation to both mental illness and various forms of unconventional behavior. The film becomes more incoherent as it goes along, culminating in a ludicrous standoff with the police, during which James is covered in shaving cream, and a completely unexplained death. As easy as it is to laugh at Maladies, though, it’s sometimes just as easy to laugh with it. … All of the actors, including Franco, do excellent work, given the limitations imposed upon them by a scenario that doesn’t make a whole lot of sense. Were he a struggling up-and-comer rather than a movie star, the perception of an ambitious misfire like this one would probably be quite different. It’s not a good movie, but it deserves better than mockery.” – Mike D’Angelo, AV Club

“Divided into variously titled chapters (Feelings, Symmetry, I See You), the film attempts to explore its characters' wobbly emotional states via the art they create and, in some cases, destroy. …As James asserts here about art, ‘Everything needs to be made. And it needs to be made by someone.’ Everything, that is, but this tedious cinematic exercise.” – Gary Goldstein, LA Times

“… Maladies is for us best summed up in one word: wasteful. It is wasteful of the considerable talents of a fabulous cast, wasteful of a pleasingly off-kilter visual approach, and wasteful of our time. It is even wasteful of a director whose instincts, no matter how much he may want to kick against them, seem to lie more in the direction of the kind of classical, straightforward story he is at pains here to not give us. Nope, this is a film that Comments On The Creative Process, and Refers To Itself As A Film and Makes Statements About Sexuality And Gender and Has Its Characters Conflate With Their Real-Life Personas—this is nothing so fusty and old-hat as a classically told story. Which is not to say we’re against the idea of filmmakers playing with the form or challenging norms, but only if the result is playful and/or challenging. This is neither—ultimately it’s alienating and not a little dull, in love with the idea of trying to say something deep and meaningful, but simply not having the necessary wisdom. In fact, it only ever connects in the small moments that fall through the cracks of the supposed formal and thematic experimentation—when the fine actors are allowed to walk and talk like real human beings, rather than a collection of tropes.” – Jessica Kiang, Indiewire.com